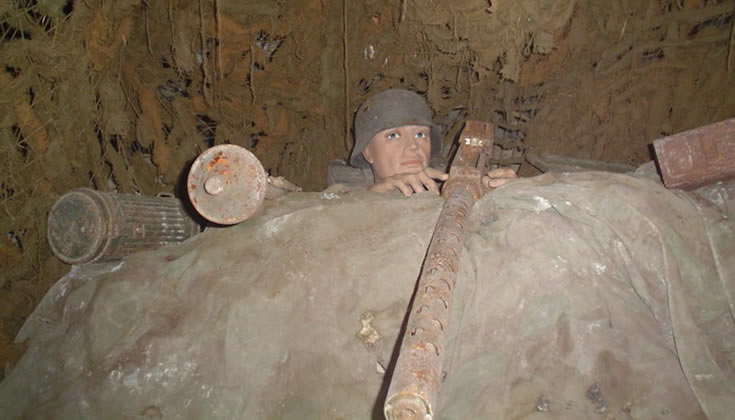 For the "protection of its territory", Germany started in the year 1936 (officially in 1938) the "construction of an enormous fortified line" along its western borders. This line reached from the border-area of Basel (Switzerland) up to Kleve (Germany, lower Rhine area) and was 630 km long. They called it the "Westwall".

Of the 22.000 forts, bunkers and pillboxes planned, 14.800 were constructed, among them 32 forts of the type "B", with 2 m thick concrete walls. At Irrel, 2 forts of this type, the "Katzenkopf" and the "Nimsberg", were built as northern stronghold of the "Westwall", tasked to secure the important Road-axis Luxembourg-Cologne.

Both of the upper Floors were originally divided into 45 rooms of varied sizes. These were the troop quarters for the crew of 84, guard rooms, gunnery rooms, first-aid station, lavatories, ammunition supply, cold storage chamber, canteen, kitchen, as well as telephone control and radio station.

More than 60 electric motors for the ventilation system, the water pump, the heating and the lighting were supplied by electricity produced by two diesel-engine generators.

The fort itself and its immediate area could be defended by several firing positions to include two gun-turrets with 6 firing-holes for 2 sMG34 each, a 500 mm grenade-thrower and a flame-thrower. The artillery and infantry watch-turret was used for the all-round observation and the shooting commands.

On the fourth and deepest floor are two large galleries totalling 138 m of length. One leads to the waterpump-room installed over a180 m deep well, the outer to the remote gun-turret.

We use cookies on our website. Some of them are essential for the operation of the site, while others help us to improve this site and the user experience (tracking cookies). You can decide for yourself whether you want to allow cookies or not. Please note that if you reject them, you may not be able to use all the functionalities of the site.